By RFI
by Hermione Gee


Iraq’s Kurdistan Region is home to one of the world's oldest Christian communities. In the last decade it has also welcomed Christians from the rest of Iraq who were persecuted for their religious beliefs. Christmas in Kurdistan takes on a special meaning for Christians knowing that not all their fellow citizens are free to celebrate the holiday.


You might think that one place you could avoid Christmas music in mid-December would be Iraq. But driving through Erbil, capital of the country’s Kurdistan Region, on a wet December afternoon, the local Babylon FM radio station has a full festive play list.
That’s because Kurdistan is very different from the rest of the country as many Iraqi Christian refugees have discovered in recent years.
Since the 2003 Iraq war, the Kurdistan Region has offered a safe haven to Christians fleeing religious persecution in
Baghdad, Mosul, Basra and other Southern Iraqi cities. The small suburb of Ainkawa lies on the edge of the region’s capital Erbil and about 90% of its 40,000 strong population is Christian, most of them Assyrians or Chaldeon Catholics.
Ninos Mishu is a priest at the Assyrian Church of the East, St John Baptism Church, in Ainkawa, Erbil.
“We have [on] 24th, Monday, we have a prayer beginning at 7.30 for celebration for  coming of Jesus. And at morning 7.30, Tuesday, 25 December, we have a holy mass.”
“We are free here in Kurdistan to use our church here to pray, to make a holy mass. We are so safe here. We are always celebrating our prayers or holy mass. And there is no problems recorded until now. Thanks for God, and for our government that love the Christian people. And our neighbors, the Muslims, they are always giving their greetings for us, in Christmas or Easter.”
Christmas hasn’t always been so easy for Father Ninos. He and many of his congregation came to Kurdistan in 2007 from Dora, a town south of Baghdad, where the situation was very different:
“More different, more different, yeah. We was attacked as Christians. We spent Christmas in big fear. Our church was bombed by the terrorism, so we used for Christmas another church. It was problem to reach to the church, really.”
Not only can Ainkawa’s many churches openly celebrate Christmas, the town has also been a riot of festive decorations for weeks – closer to Santa’s Grotto than the heart of the Middle East.
Elias Abel Achoul is the owner of the events planning company White Pro and has donated this year’s Christmas tree to the neighborhood. An enormous conical structure, it has pride of place on a busy main road at the entrance to the town.
“It’s 39 metres [tall]. It’s the biggest one in the Middle East. We’re trying to do something special. We want to do something for the people to make them happy, to enjoy Christmas. We are late little bit, but today we’re going to finish it. It’s not because Ainkawa is Christian only. We do it for Erbil. We don’t do it for Christian or Muslim – everyone here lives together. They don’t have any problem, I think.”
And while Christians and Muslims do live together in Kurdistan, the government and its security forces are still very vigilant around Christmas time, explains Bassim Hermes, a manager at the local Christian community television station, Ishtar TV, and a native of Ainkawa.
“Our tradition is different from others. When you come to Ainkawa, you cannot feel you are in a part of Iraq. You have lights, trees everywhere. Ainkawa, it’s something special. We have the biggest Christmas tree in the Middle East, so sure there will be some people who don’t like it, but we have the government supporting us. To avoid any sort of problems, anything that might happen that might not be good for those special days, therefore Ainkawa is totally surrounded – the security, the police. The main issue for the government is to let people celebrate, to live their life. They want these people really to enjoy this time, that’s the only reason. If you feel you are safe, if you are secure, that’s freedom.”
And even though Ainkawa’s Chrisitan population does feel free these days, Hermes says it’s important not to take their situation for granted:
“We are Christians living in Iraq. God forbid, if something happens here, if something happens to the Christian people in this region, there’s nowhere else to go, we have to leave the country. It’s our last destination here. God forbid, if something happens, then you cannot find any more Christians here.”
Pubblicato da Baghdadhope alle 16:26

Behind blast walls and with police nearby, 200 worshippers attended Christmas mass Monday at Baghdad's Our Lady of Salvation Church, which officially reopened this month after a massacre in 2010.
Sat in wooden pews with a two-metre (six-feet) high inflatable Santa Claus and a Christmas tree placed at the back, many cradled young children as a sermon was delivered with other youths playing in the church's courtyard.
Atop the church stood two Iraqi security forces members with rifles, while people who wanted to go inside were frisked at the entrance to the church compound, surrounded by four-metre (12-feet) tall blast walls and concertina wire.
"This is our first Christmas at this church since the attack," said 40-year-old Nasrat, one of the worshippers. "We are feeling very happy about the reopening of the church."
"Despite the painful attack, the church now looks even more beautiful than before."
Nasrat, who only gave his first name, was referring to an attack on October 31, 2010, when militants stormed the church and killed 44 worshippers, two priests, and seven security force personnel.
Photos of the two priests killed are now posted on either wing of the church, ribbons have been tied across the columns inside, and whereas the building's windows were shattered in the attack, they have since been replaced with stained glass and wood panelling.
Though church services still took place in the aftermath of the attack, it was officially reopened on December 14.
Three men convicted in connection with the massacre have since been sentenced to death.
"When the attack happened, all Iraqis felt deep pain, not just me, because an attack on a church is an act of a non-believer," said Ghassan Idmon Shamun, another worshipper. "Today I feel great coming to this church."
"Thankfully the situation is improving for us Iraqi Christians -- people are coming in, and attending the mass, and there is security present."
The 50-year-old added: "Before, I thought about leaving Iraq, but now as the situation has improved, I am not thinking about leaving anymore."
Iraq's Christian community is one of the oldest of its kind in the world. But along with other Iraqi Christians, they suffered persecution, forced flight and killings in the aftermath of the 2003 US-led invasion.
Before 2003 there were more than a million Christians living in Iraq. Now they number around 450,000.
According to the UN refugee agency, many thousands fled after the 2010 attack, and from 2003 to May 2012, some 900 Christians were killed, while 200 were kidnapped, tortured and ultimately released for exorbitant ransoms, according to the Hammurabi Human Rights Organisation in Iraq.
Pubblicato da Baghdadhope alle 16:26

Il Natale festa nazionale in Iraq per i cristiani. 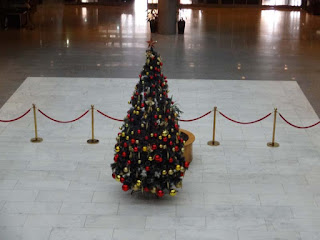 By Vatican Insider
by Gianni Valente 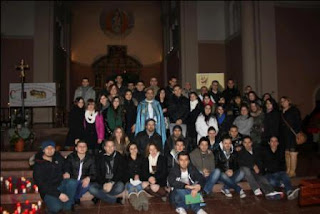 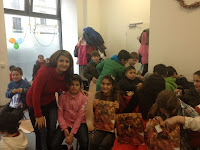 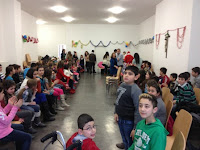 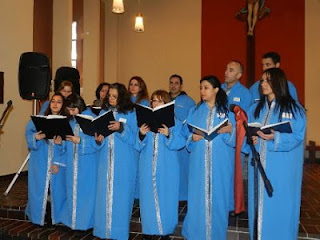 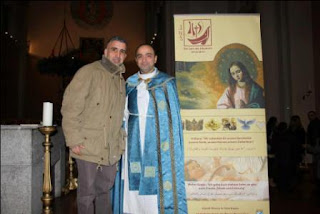 By Asia News
by Joseph Mahmoud

Iraqi Christians and Muslims are judging Cardinal Leonardo Sandri's visit to the largest mosque in Kirkuk a "historic event".  The Prefect of the Congregation for Eastern Churches met with Muslim leaders of the city, and was then received by the governor Najm Alddin Karim who has used the occasion to confirm that December 25, Christmas Day, will be a "public holiday and day of vacation for everyone." Meanwhile, the government in Baghdad has ordered Egyptian TV channel Al Baghdadia be blocked, after the fatwa launched a few days ago by Shiite Ayatollah Ahmad Al Hassani Al Baghdadi against Christians. In Iraq the radical leader's words were ignored.  No one wants to comment on them, but a government source confirmed that the Islamist leader "is not a pleasant person" and is "banned" from the country.
In the "historic visit" of December 16 to the largest mosque in Kirkuk, Card. Sandri and the Apostolic Nuncio in Iraq, Archbishop Giorgio Lingua led by Archbishop Louis Sako met the highest Muslim personalities of the city. The event was held at the end of afternoon prayers, in the presence of the highest offices of Shiite and Sunni Islam, along with many faithful. Yesterday, the Cardinal visited the city of Erbil in Iraqi Kurdistan, the last leg of his journey before returning to Rome.
Ahmad Hamid Amin, imam of the mosque, welcomed the Cardinal "in friendship", judging the visit "a historic event" that marks the lives of Kirkuk governorate in northern Iraq at the center of a bitter dispute over gas and oil exploitation. It is a great honor to have among us, said the Sunni leader, "the envoy (Saydna) of the Pope".  He went on to appreciate the "Christian presence" because "we are brothers and sisters, without difference and we must live in harmony". Finally, he asked Card. Sandri to "transmit to the Pope the most sincere and respectful wishes for Christmas." The Shia Imam Abbas Fadhil Abbas spoke of Christians as "flowers, and a garden without flowers is not a garden." He was echoed by the Sunni leader Ali schekh Alkhalidi, who made a comparison with "the visit of a Christian delegation to Muhammad in Medina", hoping at the same time the "multiplication" of these initiatives will "help the path of dialogue."
Card. Sandri repeatedly thanked "everyone" for this "warm reception", the Cardinal said that "peace is a project" towards which they must work together "Christians and Muslims," ​​because "without peace there is no civilization or progress". "All of us, Christians and Muslims - said the Vatican prefect - we must work together to establish peace and respect for the rights of all. In this sense, it is essential the work of Iraqi Christians, who" must remain in the country "and live in full human dignity. "
The words of religious leaders were broadcast through loudspeakers on the minaret and translated into Arabic, so the whole neighborhood could hear. At the end of the visit, the cardinal presided at the Mass in the Cathedral according to the Chaldean rite, in the presence of the faithful and authorities. During the function Msgr. Sako spoke, stressing the Christian belonging to the "beloved land of Abraham, who hoped against hope." And it is this element, added the prelate, which "urges us to continue to remain in the land of our fathers." The visit of Cardinal Sandri, he said, "has made us feel we are a living part of the universal church."
Pubblicato da Baghdadhope alle 15:53

By Asia News
by Joseph Mahmoud