Forum in Kirkuk "Let us build bridges for peace"

By Baghdadhope*
The meeting among the different ethnic groups in Kirkuk which took place on last Thursday and organized by the Chaldean Archbishopric of the city achieved its first successes as referred to Baghdadhope by Archbishop Louis Sako.
The imams of the city had positive words for the meeting in the Friday speeches in the mosques, a committee formed by a Christian, a Kurd, a Turkoman and an Arab was set up to track its developments, the president of the provincial council, a Turkoman, said that if  Baghdad failed Kirkuk, instead,  made an historic step, and a Kurdish tribal sheikh recognized the conciliatory role of the church in building what the title of the meeting had promised: bridges of peace.
Following the original final document of the meeting by the Chaldean Archbishopric of Kirkuk.
Forum in Kirkuk "Let us build bridges for peace"
Proposed by archbishop L.Sako
In a initiative from the Chaldean Catholic archdiocese of Kirkuk and in its hospitality,  a forum was organized by it as  a godfather, under the Motto "Let us build bridges for peace" as un effort of reconciliation of all political, religious leaders  and responsible of the local   government. The forum took place in the big hall of the cathedral, in the morning of Thursday 26 of April 2012, more than 50 persons attended it, and at the end they released this document of convention:
So to not stop at the borders of wishes and speeches, so  to not give up to the painful reality, so to play our responsible, we pledge as much as it  depends on us,  to be involved to implement the  points  of this Covenant, which we  declare today for all.
1 - We pledge to continue to live together and maintain the mosaic formation of the city of Kirkuk in harmony and respect.
2 - We pledge to resolve the outstanding problems by sitting together and dialogue smoothly beyond all kinds of threat and violence. Violence will not change and improve the situation, but on the contrary, it will drown our city in a series  of ​​injustice, deprivation and underdevelopment.
3 - We pledge to seek the dismantling of hate speech, marginalization, and exclusion and to maintain the culture of reconciliation, and cohesion and calming the situation.
4 – to get to a consensus about the election of the members of the  province council which assure the participation of all components.
5- We call on relevant authorities to study the dossiers of detained people and to admit them to the court to see their cases without waiting for long wile  that the innocent of them can return to their families, as well as  to resolve with  justice and  wisdom the subject of the disputed territory.
6- We urge the Iraqi central government and the government of Kurdistan to resolve the problems instead to complicate them which affect badly the situation specifically in the fields of service, economy, security etc ..
7 –To Form a committee to manage the diversities and differences and to follow up the dialogue and to activate it in preparing other meetings.
So in this spirit, we have worked to abolish  the barriers among  us and that we looked at each other as free persons, and looked  for peace and not the rivalries and disagreements ,we want to be peace makers indeed.
Pubblicato da Baghdadhope alle 20:44

"Building bridges of peace", a project that unites Christians and Muslims in Kirkuk

By Asia News
The Chaldean Archbishopric of Kirkuk, northern Iraq, organised a reconciliation forum today on "Building bridges of peace", on the initiative of Mgr Louis Sako, archbishop of the city. The meeting brought together Christian and Muslims leaders, altogether some 50 people, including politicians like the provincial governor, lawmakers, party chiefs and tribal sheiks; religious leaders from the Shia, Sunni and Christian communities; and representatives of the Kurdish, Arab, Turkmen and Assyrian-Chaldean communities.
The forum comes a few days after a series of attacks left a trail of blood and destruction in Kirkuk as well as the rest of the country. Despite the departure of US troops, the situation has not improved and peace and security remain as elusive as ever.
Today's meeting is "an opportunity for all parties" to sit around a table to talk "in a civilised manner", Church sources in Kirkuk said. This way they can try to solve problems and bridge divisions, thus "reducing tensions rather than make it worse with threats."
Among the various speeches and interventions, Mgr Sako presented a seven-point proposal that participants signed as a joint "commitment" to dialogue and peace. An ad hoc committee made up of individuals from various backgrounds will be set up to evaluate the application of its principles and directives.
In his address, Mgr Sako reiterated the principle of dialogue with Islam so that people can live together and overcome theological issues that today are unsolvable.
For Christians, this means adopting a language that can be "understood" by the Muslim community. At the same time, a "secular civil society" is necessary based on "shared Iraqi citizenship."
A number of plans are on the drawing board to achieve these goals. They include a kindergarten for 80 children (10 per cent Muslim) and an elementary school that should open in September.
Pubblicato da Baghdadhope alle 19:49

By Baghdadhope*
Baghdadhope pubblica il testo del discorso pronunciato da Mons. Giorgio Lingua, Nunzio Apostolico in Giordania ed Iraq, nel corso del ricevimento offerto dalla Nunziatura Apostolica della capitale irachena in occasione del VII anniversario dell'elezione di Papa Benedetto XVI.
Si tratta, come ha sottolineato Mons. Lingua, del primo ricevimento di questo genere dal 1995 quando fu sospeso, prima a causa dell'embargo e poi per ragioni di sicurezza.
Una Santa Messa per il Santo Padre sarà celebrata nella cattedrale latina di Baghdad mercoledì 25 aprile. Mons. Selim Sayegh, Vicario emerito del Patriarcato Latino di Gerusalemme per la Giordania, terrà una conferenza sul ministero petrino ed a lui sarà affidata l'omelia durante la celebrazione. Una seconda Messa sarà officiata ad Erbil domenica 6 maggio.
Holy Father's Day 2012
Speech of the Apostolic Nuncio
April 19, 2012
First of all I would like to extend my cordial welcome to the Minister of Foreign Affairs, the representatives of the Government, Parliament, the members of the Diplomatic Corps, representatives of Churches and all the friends of the Apostolic Nunciature.
We meet here tonight to commemorate the 7th anniversary of the Supreme Pontiff Benedict XVI’s election, who a few days ago also celebrated his 85th birthday. Seven years have already passed since 19 April 2005 when Cardinal Joseph Ratzinger was chosen as Bishop of Rome becoming the 265th Successor of Peter.
The diplomatic relations between the Holy See and the Republic of Iraq were officially formalized in 1966, even though the presence of the Holy See in this country goes back to the seventeenth century. Since then, this presence was uninterrupted, first through Apostolic Delegates, at consular level, and then through Apostolic Nuncios, with the rank of Ambassadors, even in the most difficult moments of the political life of Iraq. With some pride I can recall that the papal representatives have never left this country even during the two recent Gulf Wars.
Receiving the Letters of Credence of the Ambassador of Iraq, July 2, 2010, Pope Benedict XVI said: "You may be assured that the Holy See, which has always valued its excellent diplomatic relations with your country, will continue to provide whatever assistance it can, so that Iraq may assume its rightful place as a leading nation in the region with much to contribute to the international community ". In this regard I would like to congratulate the Iraqi authorities on the outcome of the recent Arab League Summit, a sign of normalization of the international role that Iraq is recovering. Also this reception, the first organized after about 18 years, which was suspended in solidarity with people affected by the embargo and then for security reasons, it is a small though significant indication of it.
The excellent relations between the Holy See and Iraq are reflected in the meetings of the highest Iraqi authorities with the Holy Father Benedict XVI. I can only express the profound hope that one day the Pope will reciprocate these visits, and put his foot on this land of Abraham a land which is part of the common patrimony of the three monotheistic religions.
" Since the earliest days of the Church  - still remembered the Holy Father in the above-mentioned address to the Iraqi Ambassador  - Christians have been present in the land of Abraham (…). It is greatly to be hoped that Iraqi society in the future will be marked by peaceful coexistence, as is in keeping with the aspirations of those who are rooted in the faith of Abraham. Although Christians form a small minority of Iraq’s population, they have a valuable contribution to make to its reconstruction and economic recovery through their educational and healthcare apostolates, while their engagement in humanitarian projects provides much-needed assistance in building up society ".
The Holy See is working for the Iraqi Christians to remain in their ancestral homeland and hopes that those who were forced to emigrate will soon find a safe place to return and resume their activities.
While  thanking the Iraqi authorities for all the efforts and the significant progress made in ensuring security in the country, despite sporadic terrorist attacks like those of today, which must be condemned with force and determination and for which I wish to express my deep sorrow and sincere condolences, I hope that the spirit of reconciliation among all the political, religious and ethnic groups will prevail so that the wonderful mosaic of the people which constitute this population will find the path to peace and prosperity for the entire Iraqi people.
Di seguito il testo del discorso di Mons. Lingua in arabo e la traduzione del  in italiano.
Traduzione ed adattamento di Baghdadhope
Continua a leggere...»
Pubblicato da Baghdadhope alle 18:25 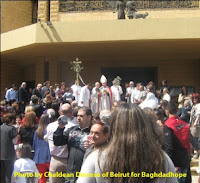 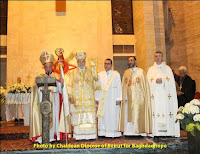 By AKnews
Kirkuk's governor described the Easter prayers by Christians last night as a sign that the security situation in the province is improving and moving towards stability.
"The Christians held their prayers for the first time at night and this shows the improved security situation," said governor Najm al-Din Omar Karim during his visit this morning to the Kirkuk Chaldean Christians Cathedral.
"We congratulate you on this occasion and we feel very happy because we share your joy."He assured that Christians are of great importance in the hearts of people in Kirkuk and Iraq.
"We hope this event will contribute to the consolidation of the ties of brotherhood, love and tolerance between religions, sects and ethnic groups," added Karim.
He said the Kirkuk administration is seeking to provide better services to the people of the province in all religions, sects and ethnic groups.
Priests Asilo Aziz Rassam and Ustaifan Rabban praised the efforts of the Kirkuk governor to improve the province and its services.
The priests said they hoped Christians from overseas will "return to their homeland to help build their city".Kirkuk's Christians held their prayers from 9.00pm until midnight yesterday.
Pubblicato da Baghdadhope alle 15:09