Running from ISIS: The story of Monsignor Thair Sheikh 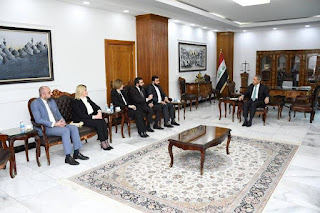 By Chaldean Patriarchate
The Chaldean Church, expresses its pain and deep concern about the crisis created by the results of the parliamentary elections. We are launching this appeal out of the patriotic feeling that resides in all of us, calling on everyone to show high national and moral responsibility in dealing with these results.
Otherwise, the country will face the “worst” and we all know that Iraq cannot bear more.
From the standpoint of fidelity, the Chaldean Church appeals to all those concerned with the elections, including political parties, academic leaders, religious authorities, etc. to make efforts and contain this crisis wisely, by organizing a sincere and courageous national dialogue aiming to reach an acceptable solution according to Iraqi constitution and law, to expedite the formation of a national government capable of correcting the path, fighting corruption, protecting sovereignty, unity of the country, and providing a security and dignity for Iraqis
Pubblicato da Baghdadhope alle 15:40

By The New Arab
Michal Kranz
November 4, 2021
For Ankawa, an Assyrian Christian-majority suburb of Iraqi Kurdistan’s capital Erbil, the last decade has been one of change and transformation.
Its population swelled in 2014 as Assyrian Christian refugees from other parts of northern Iraq poured in ahead of the Islamic State’s (IS) onslaught, cementing the town’s status as one of the primary nodes of Iraqi Kurdistan’s Christian community.
Mechanical engineer Liver Dakali moved to Ankawa from Erbil in 2019, well after the wartime surge. Although he wasn’t fleeing war, he too felt the pull of the town’s Christian character.
“We are a minority there in Erbil, so we were alone. It was uncomfortable to celebrate occasions like Christmas,” Dakali said. “So we came here.”
"Ankawa's population swelled in 2014 as Assyrian Christian refugees from other parts of northern Iraq poured in ahead of the Islamic State's onslaught"
On 4 October, Iraqi Kurdistan’s Prime Minister Masrour Barzani moved to recognise Ankawa’s ethno-religious distinctiveness by announcing that the town would become a separate, autonomous district from Erbil for the first time.
Like others in Ankawa, Dakali said he is hopeful that the change will lead to improved infrastructure, public services, and security. But for him, any additional quality of life benefits for Christians in Ankawa or beyond will be limited at best.
“I don’t think there will be a significant effect,” Dakali said, referring to the move’s impact on the broader Assyrian Christian community in Iraqi Kurdistan.
According to locals and political leaders alike, Ankawa’s new status will be a positive development for the Christian community in Iraqi Kurdistan, and despite some reservations, Dakali and other residents remain optimistic about the town’s future.
Yet many argue that the change does not go far enough, and claim that although Ankawa’s new designation is a step in the right direction, the Kurdistan Regional Government (KRG) must take serious and concrete steps to rectify a host of grievances before Assyrian Christians can feel completely at home in Ankawa or elsewhere in Iraqi Kurdistan.
For activists and community leaders, wedge issues like taxation, land expropriation, and the erasure of Assyrian Christian identity will continue to plague Christians in the KRG despite the shift in Ankawa’s status.
As part of his 4 October announcement, Barzani stated that once its new designation is implemented, Christians in Ankawa would be able to “nominate civic leaders, appoint officials, manage their own security and directly shape their destinies” — something that residents said will allow them to maintain their heritage, upgrade their cityscape, and improve zoning practices to protect residential areas.
Continua a leggere...»
Pubblicato da Baghdadhope alle 16:52