Iraqi Christians in Jordan Are Being 'Neglected' by United Nations, Rights Activist Warns

Thousands of Iraqi Christians who fled their homes in fear of being killed by the Islamic State and have sought shelter in neighboring Jordan are being “neglected” by the United Nations in their quest for refugee status and resettlement, an Assyrian Christian human rights activist has warned.
Earlier this month, Juliana Taimoorazy, a research fellow with the Philos Project and founder of the United States-based NGO Iraqi Christian Relief Council, traveled with others to Iraq and Jordan for a “fact finding” mission about the status of Christian refugees displaced from their homes due to the rise of the jihadi death cult in Northern Iraq in 2014.
In a recent interview with The Christian Post, Taimoorazy explained that while she was pleased by the progress being made in assisting and returning Iraqi Christians to their homes and villages inside Iraq, the two days that she and her colleagues spent with displaced Iraqi Christian families in Jordan broke their hearts.
“They are completely neglected by the UNHCR — completely,” Taimoorazy explained, referring to the United Nations High Commissioner for Refugees.
According to estimates that Taimoorazy received from sources on the ground in Jordan, there are currently around 15,000 displaced Iraqi Christians seeking shelter in the kingdom.
Taimoorazy and her colleagues were able to meet with and listen to the experiences of at least 30 Iraqi Christian families during their time in Jordan.
“They actually live in poor neighborhoods in suburbs of Amman. There were three families that we met that were living in a three-bedroom apartment,” Taimoorazy detailed. “There is no privacy. They complain that aid does not get to them. Different charity organizations come but they don’t bring enough aid. UNHCR has not granted a majority of them refugee status as of yet.”
According to estimates Taimoorazy is familiar with, there were around 25,000 Iraqi Christians displaced inside Jordan in 2015 when she last visited the country. Although about 10,000 of those Christians have been resettled to countries like Canada and Australia, the remaining 15,000 have been trapped in the system, Taimoorazy stressed.
Many of those Christian families, she stated, are simply just waiting to hear back from the UNHCR about when they can finally complete the process to be given refugee status.
“What happens is when they get to Jordan, they are interviewed and are given the file number and paperwork. And then, they are asked to wait. They don’t tell them when they will get called back in for the second interview, when they will get refugee status. The majority of them have not received that second interview,” Taimoorazy relayed. “The ones that have been interviewed for the second time, they don’t know when they are going to be contacted again to go for the actual process to be accepted to another country.”
According to Taimoorazy, she was told by some of the Christian refugees in Jordan that the UNHCR is not actively reviewing their documents in a timely manner.
“They see Muslims from Iraq and Syria are coming in and flowing out of the country,” Taimoorazy asserted. “What we assess and what they say on the ground is they don’t want for these countries or UNHCR to be perceived that they are giving preferential treatment to the Christians, even though Christians were specifically targeted for their faith. We are not asking for preferential treatment. We are asking for timely processing of their paperwork.”
Of the Christian refugees in Jordan that Taimoorazy spoke with, the ones that did get a second interview with UNHCR were rejected by Australia, she said.
Taimoorazy also spoke with two Iraqi Christians in Jordan who served as translators for the U.S. military during the Iraq War of the 2000s.
“They worked for a company employed by the Americans. They are not even being interviewed [by UNHCR]. Nobody is even looking at their file,” she said. “This woman was crying and told me, ‘I didn’t have to work but I trusted the Americans.'”
“She went to work for the Americans with the hope of being treated well and in the future that her family would be mobilized to America. She was kidnapped and tortured by the Iraqis because of her allegiance to the U.S. She says that the United States is not looking at her file at all.”
That particular translator is not alone.
“A lot of translators and employees are being neglected by the UNHCR and the American government and they are not looking at their paperwork,” Taimoorazy declared. “That is the situation in Jordan. They are devastated truly.”
Taimoorazy plans to make an advocacy trip to the United Kingdom next month to raise awareness about the plight of Iraqi Christians in Jordan.
“I am going to be attending an event in the Parliament and I have a series of meetings set up there to really talk about the entire situation but also what is happening to the people in Jordan,” she said.
Pubblicato da Baghdadhope alle 15:31 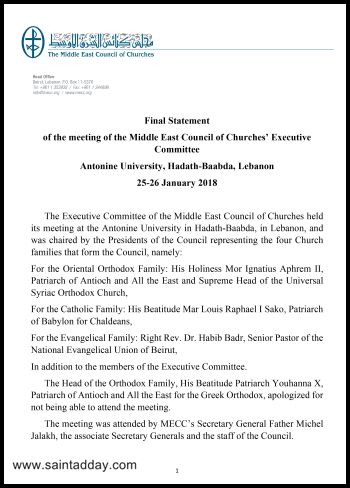 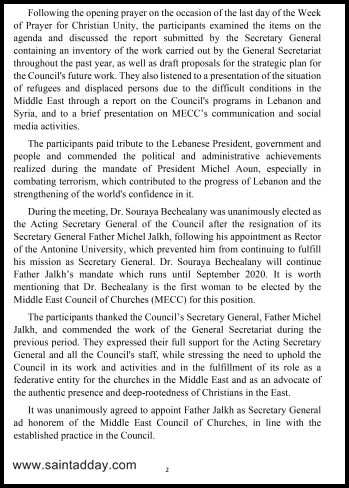 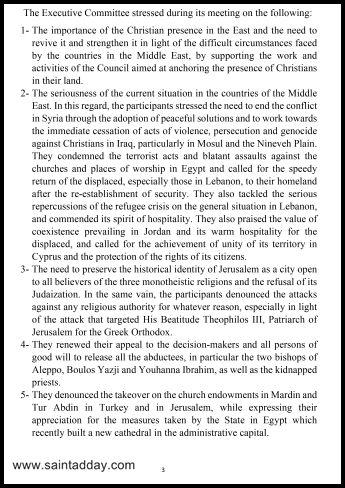 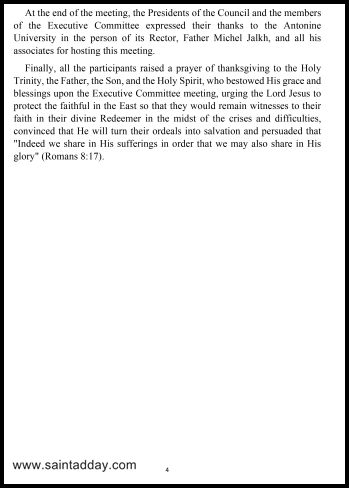 Reframing Indigeneity: The Case of Assyrians in Northern Mesopotamia

Notes
1. The Iraqi delegation’s official position is that Iraq does not have an indigenous people; instead, it has various ethno-religious minorities. This position, however, stands in contrast to the definition of “indigenous peoples” set out in the United Nations Declaration of Rights of Indigenous Peoples.
2. There has been some discussion of Armenians’ claims, including to land in Turkey, but this has been largely a legal response to genocidal acts and mass expulsions, separate from any rubric specifically concerning “indigenous” rights.


Sargon George Donabed is associate professor of history at Roger Williams University. He is the author of Reforging a Forgotten History: Iraq and the Assyrians in the Twentieth Century.
Daniel Joseph Tower is a PhD candidate in the Department of Studies in Religion at the University of Sydney. He is the co-editor of Religious Categories and the Construction of the Indigenous.
Pubblicato da Baghdadhope alle 15:22

Beatitude, Eminence   Words are not enough to express thanks and gratefulness on behalf of myself and my brother bishops who accompanied me during this visit: Mar Yousif Toma Mirkis, Mar Habib Al-Nawfaly and Mar Basilios Yaldo. It was really a great honor to participate in the Silver Jubilee celebration of the promotion of Malabar Church to a Major Archbishop, and  an opportunity to meet with your Beatitude and members of the Holy Synod to exchange ideas, enrich and broaden our minds in a way that takes us back to our historical bonds, tradition, and common “Oriental” roots.
Despite the shortness of this trip (10 to 16 January 2018), we think it has opened the door widely for cooperation between St. Thomas Christians and the Chaldean Church; encouraged us to renew the spiritual and liturgical heritage that we share; as well as focusing on the formation of our clergy.
Beatitude, Eminence
We are really proud of the Apostolic Malabar Church, in terms of the progress, prosperity and its presence in many countries around the world following the steps of St. Thomas, the Apostle and his brave confession of faith “My Lord and my God:  “Mar Wa Allah”. This significant profession, following the resurrection of Jesus, empowers us with a distinctive authentic, deep and spontaneous perception, to work enthusiastically in spreading the Good News, same as St. Thomas did, by travelling long distances in order to share the love of Jesus Christ with others.
Beatitude, Eminence
We look forward to seeing you in Iraq, in order to hit the ground running and open the horizons up for a better future for both pastoral missions. I believe it is God’s will to initiate this relationship, particularly at this time, that the Lord has blessed your Church with great numbers of priests, monks and nuns, to assist our persecuted Chaldean Church, which is suffering from the shortage in clergy and nuns, due to successive wars and emigration. Thank God for His blessings, it seems like an echo of the past when our Church supported your Church by sending bishops, priests and monks until the sixteenth century.
Thank you again with best regards,
+ Louis Raphael Sako
Patriarch of Chaldeans 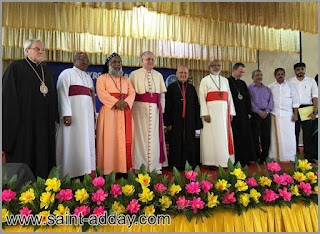 When Iraqi residents fled their homes during the Islamic State invasion, they left behind their houses, neighbors, and day-to-day lives.
For the children who fled, leaving their home behind also meant an interruption in their education – in some cases for months or years.
While some refugee camps offer classes for children, challenges abound and students often fall behind.
Now, a group of Dominican sisters in one Iraqi town is working to help educate displaced children as their families return to their homes and work to rebuild their lives.
With the support of Catholic charity Aid to the Church in Need in Spain, the Dominican Sisters of Saint Catherine of Sienna were able to restore their convent, which had been destroyed by the Islamic State in Iraq. Today, they offer classes to hundreds of children who had been displaced by the war.
“We try to help the children, giving them peace: in our convent we offer them a safe place,” Sister Ilham told ACN in late December. Despite the expulsion of ISIS, security in the area remains unstable.
In May 2017, ACN funded the restoration of Our Lady of the Rosary Convent with a grant of $54,000. Located in Teleskuf, north of the plain of Nineveh, the convent is just over 20 miles outside of Mosul.
The sisters worked 12-hour days to prepare the convent to welcome the children, Sister Ilham said.
They provide daycare for children between three and five years old. In the mornings, they teach about 150 children between the ages of six and 12. In the evenings, they teach students 12 years of age and older.
Sister Ilham, 57, was working for a church in Mosul when the rapid advance of the Islamic State forced her and her community to flee. However, after the fall of the terrorist group, she returned to the area and today is helping those displaced from Teleskuf.
“None of us wanted to leave where we come from, but as the attacks continued, we had to flee to save our lives,” she said.
“In 2016 some 6,000 people had to leave Telskuf. When I returned to this area, all the houses were abandoned and many of them destroyed,” she continued. “In Teleskuf all that is left of many of buildings are the ruins. The school and the children's home are destroyed, the doors of the convent were forced open and the sisters' home was sacked.”
In addition to teaching at the convent, the sisters visit the members of the Christian community in their homes, teach catechism to the children, and prepare them for their First Communion.
Once the local school is rebuilt, the children will no longer need to attend the convent classes. In the meantime, the sisters hope they can help the children from falling too far behind in their studies.
“Before the Islamic State invasion, there were five sisters in the convent, while now there are only two of us. Fortunately, we are will soon receive reinforcements,” Sister Ilham said.
In addition to helping fund the convent reconstruction, Aid to the Church in Need is currently helping rebuild 13,000 houses and more than 300 church properties destroyed by the Islamic State in Iraq.

This article was originally published by our sister agency, ACI Prensa. It has been translated and adapted by CNA.
Pubblicato da Baghdadhope alle 15:46