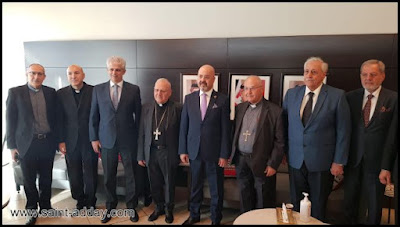 By The Arab Daily News
Ray Hanania
The American Foundation for Relief and Reconciliation in the Middle East (American FRRME) published its 2020/21 Impact Report on Monday June 20, 2022 on supporting the ongoing needs of Iraqis – primarily Christian Iraqis – who fled Iraq and Kurdistan during the ISIS insurgency in 2014.
Many fled to neighboring countries including Jordan, where according to the UN Refugee Agency (UNHCR) close to 67,000 remain living as refugees.
Susan Greer, Executive Director at American FRRME says that Christianity is in crisis in the Middle East, noting that “Iraq remains plagued by conflict and sectarian violence and many Christians are seriously affected by intolerance and persecution in the Middle East.
This is a region previously home to some of the oldest practicing bodies of Christians in the world initially evangelized by the Apostle Thomas.”
It is reported that Iraq’s Christian population has dwindled considerably due to conflict and terrorism. More than 80% have fled the country since 2003 and just an estimated 150,000 remain, down from 1.5 million a century ago. Today Christians make up just 0.4% of the country’s 42.6 million population.
American FRRME provides relief, comfort and aid to the displaced and marginalized persons of the Middle East, seeking to rebuild families and communities through programs that include humanitarian aid, education and job skills.
The organization supports the needs of Iraqi refugees in Jordan, displaced Iraqis in Iraq and Baghdad and Iraqi Christians who remained in Kurdistan and northern Iraq. In Jordan, through their Olive Tree Center and in partnership with four churches based in Jordan, American FRRME is supporting around 6,000 Iraqi refugees.
“These people were given three choices by ISIS,” continues Greer, “to convert to Islam, be killed, or leave immediately without packing. Thousands left on foot, with children and babies, the clothes on their backs and whatever they could carry.”
American FRRME also supports those displaced within Iraq, many of whom remain living in Internally Displaced People (IDP) camps in Baghdad and northern Iraq. Through their partnership with St George’s Anglican Church in Baghdad, the organization helps fund ongoing relief aid, a K5 school and the St. George’s Medical Clinic, offering free dental procedures.
For those who remained on the Nineveh Plain, the organization has funded the establishment of small business enterprises such as greenhouses, farms, bakeries and traditional industries such as olive oil production.
“We initially responded to the humanitarian crisis brought on by the ISIS invasion,” said Greer. “Since then, we have tailored our mission in response to countless conversations with the refugees we support. Many expressed losing hope for the future, unable to work due to their refugee status in Jordan, or without the financial means to rebuild their homes and businesses in Iraq and Kurdistan.”
“In Jordan, Iraqi refugees are not permitted to work, so they have no choice but to rely on aid from local churches and organizations like American FRRME. Life in Jordan is very hard and from the outset, we understood how important it was to this community to have somewhere they could gather together as Iraqis and celebrate their culture, traditions and faith,” says Greer.
In 2019, the organization opened the Olive Tree Center in Madaba, Jordan where they provide art and music therapy programs, education programs including English language classes for children and adults, cosmetology and sewing classes and a garden which provides refugees and the community with fresh vegetables. In 2021, in collaboration with the refugees, they built a woodworking shop and a mosaic making workshop.
“The refugees we support are in dire need of healing from the trauma they experienced and are desperate for a chance to rebuild their lives and regain a sense of purpose,” said Greer. “These activities provide therapeutic benefits to children and adults and give refugee women and men the chance to hone their skills, learn new skills and make practical furniture items.”
The Report also highlights the education crisis faced by Iraqi refugee children. Globally, 91% of children attend elementary school, whereas only 63% of refugee children have this opportunity; of that 63%, only 24% attend high school. According to UNHCR, there are around 18,000 school-aged Iraq refugee children in Jordan who face myriad barriers to going to school.
“Education is highly regarded within the Iraqi community,” says Greer. “Trauma and years of displacement as a result of war and persecution has disrupted these children’s education. In addition, those living as refugees in Jordan are not afforded the same rights as Jordanians so access to education is not equitable. The majority of the schools are for those of the Muslim faith, which for Christian children brings its own challenges. Many Iraqi children are missing out on attending school with a regular schedule. They begin to lose the opportunity to gain any meaningful qualifications. They really are stuck.”
In March this year, the organization launched a scholarship fund to help refugees in Jordan gain an education. The General David E. Greer Scholarship Fund was established in memory of former American FRRME Executive Director Brigadier General David E. Greer who lost his life to a tragic accident in 2020.
“Through the work of American FRRME, I have met many Iraqi families living as refugees in Jordan,” says Greer. “I am constantly impacted by the effects of displacement on the children. A few months ago I met a teenage girl who desperately wanted to progress beyond eighth grade and become a teacher. Sadly, her family cannot afford to send her on to the local Christian school to complete her education.”
“It’s young people like this who we want to help through the General David E. Greer Scholarship Fund.”
According to their 2020/2021 Impact Report, American FRRME enabled 400 refugee children to attend various education classes in Jordan, distributed 29,424 food packages to Iraqi refugees in Jordan, funded 1,500-2,000 medical treatments at St George’s Medical Clinic in Baghdad and invested $90,155 in development projects in the Kurdistan region of northern Iraq.

How Iraq’s Christians are rebuilding their ancient churches 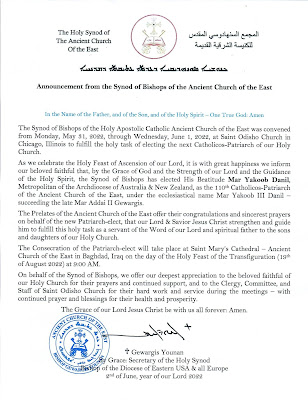